A short walk down the track from our property is the river Douffine. Twice every day this provides a place to exercise an enthusiastic young Springer Spaniel. We walk down through the oak to a plantation of pine running along one side of the river. The variation of light in here is spectacular, providing an almost mystical appearance when you look along the rows of trees and see a bright doorway at the end. The choice is to walk down the river to the weir along the edge of the pines to the weir or up the river in open meadows. 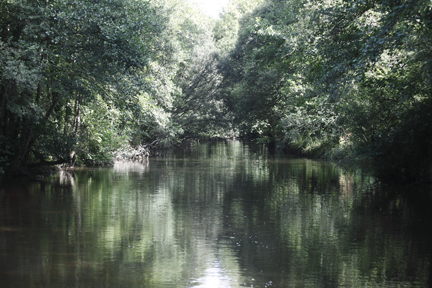 The Douffine is a fast flowing river of ever changing moods rising and falling to reflect the rainfall. At the end of March when this was written, the woods are starting to come alive with the first wild flowers appearing and the blossom on the hawthorn, reflecting in the water. 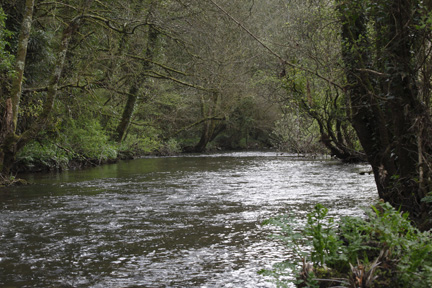 Wildlife is always present with the never ending birdsong. The river is home to otters which I have seen on two or three occasions although they need an early morning walk without a dog to stand a better chance of seeing them. Currently there is a pair of Coypu resting on the bank in a particular spot. I am sure that two will become more soon. Red Squirrels are around although these timid creatures are hard to spot. Roe deer are regular visitors to the woods and river and we often see them strolling up across our field. The other afternoon when walking up from watching the coypu I saw my first Kingfisher on the opposite bank. Now I know they are about I will spend more time down there with the camera. There is often a cormorant near the weir and we have seen Heron and Egret ( I have yet to get close enough to see which one) 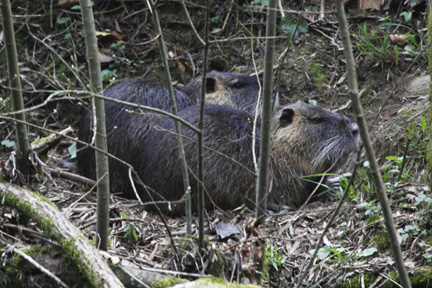 The river apparently contains Gold, in I am quite sure, very tiny amounts. In the summer if you see someone standing in the river it will probably be me panning for my fortune. There is an old disused Gold mine somewhere around Loperec which was open for a short time in the eighties.

At this time of year there is also a steady trickle of fishermen fly fishing for brown Trout. Its a good job they appear in the morning generally, as in the late afternoon they are more likely to catch a Spaniel swimming after sticks.

The river is constantly changing, the light in the valley providing a diverse range of mood. Soon there will be a carpet of wild flowers, Damsel flies dancing in the sunlight, and sparkling water jumping over rocks and stones providing a cool break from the warmth of the sun. I suppose the best thing about living by a river is that the constant flow of water reminds you that nature never, ever stops it just changes, evolves and adapts.

This entry was posted in Local Attractions, Places in Finistere, walking. Bookmark the permalink.