Pentrez Plage a beach for all seasons

Brittany has many miles of coastline; as much as one third of Frances total according to some documentation. Having never measured it I will leave that for others to ponder. There is a lot. The Breton coastline is exposed to the English Channel, Atlantic Ocean and Bay of Biscay providing a variety of coastal areas to explore. This includes rocky cliffs, bays, sandy beaches, sand dunes, salt marshes and islands.

The Crozon Peninsula is an outcrop of land South of Brest with its own North and South coastline. Pentrez is one of its many sandy beaches towards the eastern end of the south shoreline. It is in the bay of Douarnenez. As it is only half an hours drive for us it is a regular trip both in the summer and winter.

In the summer it is one of the more popular beaches in this part of Brittany, although even on a bank holiday in August you would struggle to call it crowded, more a healthy gathering. For the rest of the year it will see a few dogs exercising their humans and locals enjoying walks with friends and family along its vast length of flat sand. Sundays may be a little busier if lunchtime has passed. 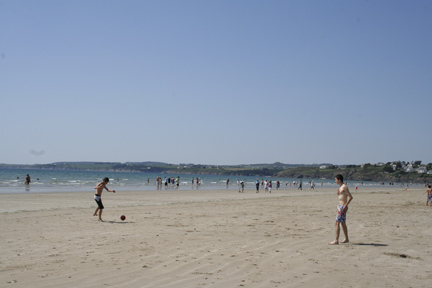 Above the tide line is beautiful soft sand – so fine you can hardly see it if you pick it up. Below the ever changing tide line it takes on a reflective quality magnified by the beachs 4km length and shallow fall. 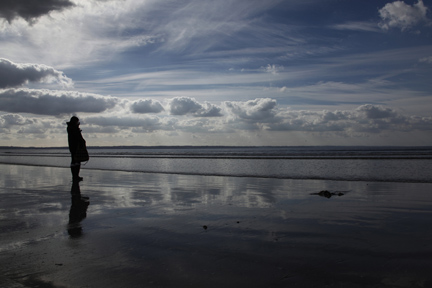 Walking along the beach in the sun you might see words or names scribed in the sand (writing in the sand is just irresistible). There might be groups playing boules, football, volleyball or just splashing around in the shallow surf. At the far end you will often see land-yachting; something Ive not yet tried but I am sure I will before too long.

We have acquired a small collection of shells which are usually in abundance as the tide falls and often seem to find their way in to our pockets and back home.

A road runs parallel with the beach giving plenty of parking opportunities and half way along there is a small group of snack bars, restaurant and gift shops, unusual in this part of the coast.

In 2007 the Sunday Times listed Pentrez in the top twenty European beaches.

For us, sitting in the sun or walking along the beach with the dog in the winter is equally enjoyable because it is such a vast space. It is one of many beautiful sandy beaches along this stretch of coastline.

This entry was posted in Beaches, Local Attractions, Places in Finistere. Bookmark the permalink.