When we first arrived to live in Brittany, we were having drinks with our new neighbours when I asked if there were plenty of places to walk in the area. It was a genuine question as I hadnt by then seen any indication of footpaths in the countryside. There was a genuine look of surprise on their faces as they replied, Yes! lots of places, even around the farm.

I have since been able to spend more time looking and investigating and can see why they were surprised at the question. France in general has a series of national paths between major destinations known as Grand Randonées (GRs). There are in fact two very close to us; the GR 380 which is a huge circular circuit of the Hills of the Mont DArree region and GR 37 which joins Rohan to the beach at Pentrez on the Crozon peninsula. The latter is part of the larger National network of paths. 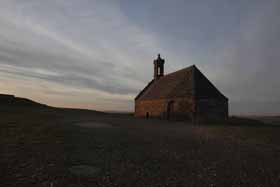 More locally there are a range of Regional circuits which can be walked for days: GRPs (Sentiers de Grande Randonnée de Pays) and shorter hiking trails which can last for several hours: PRs (Sentiers de Promenade). Also when you look on local maps there are a series of Chemins Dexploitation where access is freely available, although these are not always clearly marked or maintained. The main routes have a clear series of markings showing what route you are on and what direction the route takes.

The coast around Brittany is accessible virtually all the way around giving a huge range of scenery to enjoy. The Nantes Brest canal can be accessed along its whole length for walks. There are many recognized circuits around the towns exploring an abundance of historical buildings. From mid – March onwards the woods come to life with wild flowers and wildlife emerging to greet spring. 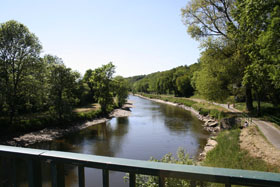 Whether you like day long hikes or short strolls in the country, there is something to suit everyone in Brittany and particularly Finistere. As I write the woods are full of primroses and catkins cover the willows. The first shoots of bluebell plants are appearing, promising a great show in May. This year I have promised myself to try and identify some of the many types of wild flower growing on the walk down to the river. 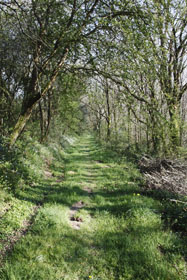 This entry was posted in general, Local Attractions, walking. Bookmark the permalink.