Guilvinec a port of many colours

One of the reasons for coming to Brittany was to be close to the sea and be able to pursue a fascination for all things nautical. A little while ago we went down to Le Guilvinec on the Southwest tip of Finistere, about a 40 minute drive from us. Its a fishing port which boasts a large fishing fleet and has made the unloading of fish into a spectator sport. It has a visitor centre where you can watch the catch being unloaded and the auction inside.

We first visited on a Sunday when you can walk around the dock where they work on the boats. Its quite spectacular to walk under the huge vessels as they are supported for painting and repairs. The rest of the fleet was all at anchor and it made quite a picture with the array of different colours on display. 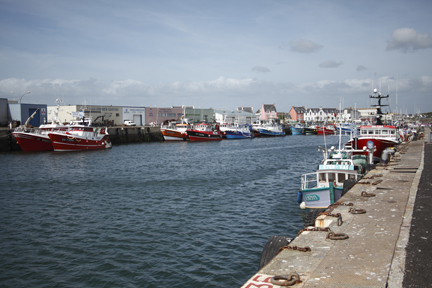 Just the other day we went back to watch the boats coming in and the spectacle was quite amazing. We joined lots of visitors on the viewing gallery above the larger boats being unloaded. These are the deep sea boats which take several hours to unload as the hold up to 25 tonnes. After a little while we walked along and down onto the entrance to the port. 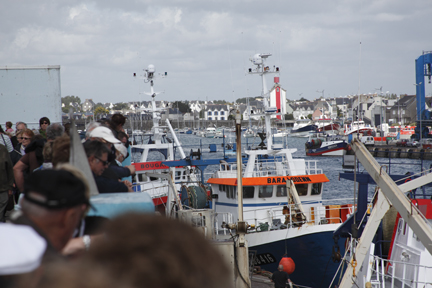 As we did, as if by magic, all the other boats in the fleet started appearing on the horizon as though someone had just blown a whistle. 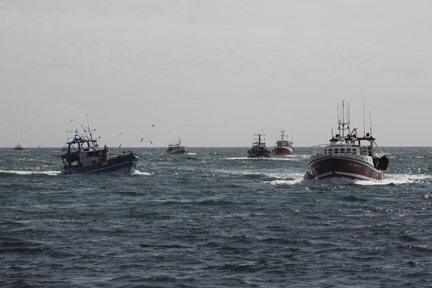 These slightly smaller boats came in twos and threes back into the port where they quickly unloaded their catch including Langoustines, crabs, red snapper and plaice to name a few. There was a throng of people gathered either watching or handing over cash to buy fresh crabs as quickly as they were passed from the boat. The whole Quayside was alive with boats moving to and fro and seagulls circling looking for the scraps. Several gulls would land and pick out the remains of fish still trapped in the nets rolled up on the backs of the boats. As the boats came into harbour many of them had seagulls sat amongst the aerial masts and radar like lookouts. 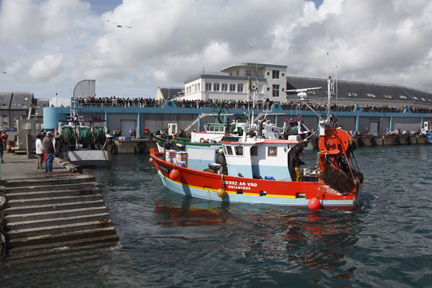 The whole image, the sights, sounds and smell will remain with us for a long time. The crowds of onlookers gazing down from above seemed to add to the atmosphere of the place. I am sure it is somewhere we will be returning to often. I will be looking for those winter sunsets behind the returning boats as they arrive in the late afternoon/ evening, Claire I am sure will be looking for some fresh langoustines.

This entry was posted in Local Attractions, Places in Brittany, Places in Finistere. Bookmark the permalink.