Below our Gites are two orchards owned by our neighbours Cathy and Herve. We have regularly sampled the products from them (Cider, Juice and Lambig which is similar to Calvados). We decided it was only fair that we would help with the picking this year now that we have finished the Gites. Claire kindly volunteered our services and then announced she was off to a Book exchange. 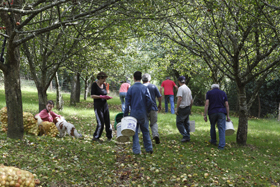 After Lunch I wandered down to the orchard where several of their friends were already gathered on their hands and knees helping our neighbours picking apples off the floor. Herve and his son in law had been hitting the trees with a fibreglass pole and the apples were then collected and bagged up. This is a good year for fruit, even I know that from the pounds of Blackberries we have been picking and consuming recently. The trees were well laden with apples and each time the stick hit the tree there was a loud rumble as hundreds of apples hit the ground. Then again after another few thwacks, the ground resembled one of those childrens areas you see in McDonalds with all the plastic balls to crawl in (not that I have done that of course). We would then move in and move around on hands and knees with buckets to fill as quickly as possible. Then after a pause for a cider break we continued onwards until we thought we had finished. 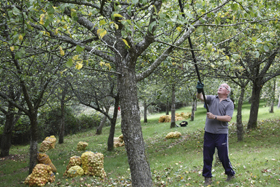 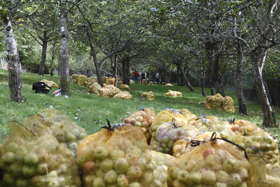 At this point much to the annoyance of his niece and nephew, who could sense victory was in sight, Herve would wander off and attack another tree. More apples littered the ground to be retrieved by the gang. Finally we reached the end of suitable trees for juice the rest are being saved fro the cider harvest in a few weeks. We had filled 63 bags by the end of the afternoon. We then loaded the bags onto the tractor so they could be loaded for transport in the morning. 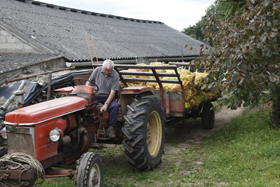 A few days later we were rewarded with a crate of bottles of apple juice that could be no fresher and the promise of more when we were ready. We had picked in the end 1600kgs of apples which had been converted into 1000 bottles of juice. Now I know what real apple juice tastes like I wont be able to view the supermarket offerings in quite the same way again. Heres to the cider harvest!

This entry was posted in general, Living in Finistere. Bookmark the permalink.