Coastal walk with an adventure if you want it.

North of Camaret sur Mer on the Crozon Penninsula is the Pointe des Espagnols. This is the Northern most point of the Roscanvel Peninsula. It gets its name from Spaniards who landed there in 1594. They were dislodged after several battles and generally only return now as tourists (not the same ones in case anyone was wondering). 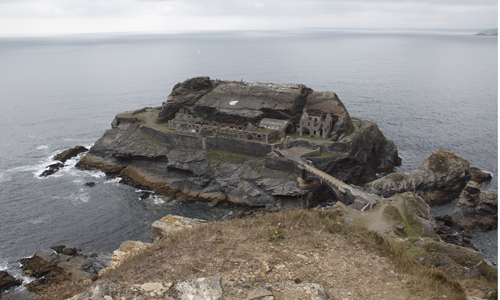 This part of the coast has long been seen as an important strategic point in the defence of the Rade de Brest. There was a fort here as early as 1387. A walk along the coast from Camaret will find you passing several such fortifications. The most striking of these is on the Ilot Des Capuchins. The Island gets its name for a rock nearby which resembles a praying monk.

The fort was built in 1848 based on plans drawn up by Vaubin 150 years earlier. (from what I can gather he was the French military equivalent of Isambard Kingdon Brunel in that wherever you go you see testimony to his enduring designs). It consisted of an underground battery and rapid fire battery on the surface. 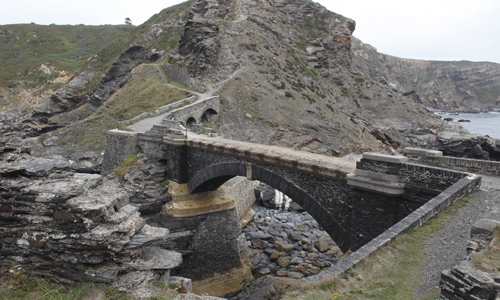 The beauty of this visit is that although it is a bit of a scramble you can explore all of it and even go underground to see where the canon were positioned looking out over the water. Would not personally recommend walking over the bridge to get to the island in a high wind as you are 50  60 feet above the water with no hand rails. The bridge is plenty wide enough and well constructed but not for the faint hearted. My Nephew Jo and I spent a long time exploring while the others looked down from on high, waving to the helicopter pilot who was circling them. (Probably waiting for one of us to fall in).

Access to this gem is down a narrow cliff track and the final descent on some steep slate steps which I imagine would be slippery in the wet, we thought we were intrepid explorers but as we were leaving a French family of three generations walked casually across the bridge. It is well worth a visit even if you only view it from the footpath at the top of the cliffs. On a warm still sunny day, go on, try an adventure. In England I am sure there would be barbed wire and signs preventing access. We are learning more and more that in France the choice of whether you take the risk and go a bit further is entirely up to you but it is your risk so dont expect to find someone to sue if you slip. 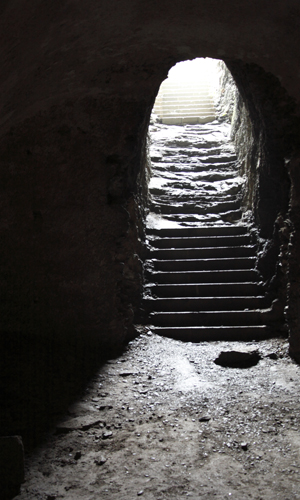 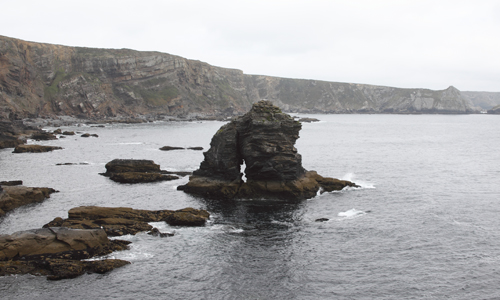 The walk along the coastal path in this area will bring you in contact with many historic forts and stunning vistas along the cliffs.

This entry was posted in general, Historic, Local Attractions, Places in Finistere. Bookmark the permalink.